My early near IR lens mods for the 808-16 were physical changes that were not repeatable with the ESP32-Cam in this post, https://www.cloudacm.com/?p=3986. I concluded that purpose-built lenses were better suited. Since this was the case, I opted to order a NOIR filtered lens for my RunCam2 4K camera. This would give me more “ready to use” features than coding another project for the ESP32-Cam. The lens I found online was for a CCTV camera with the following specs, 5MP 1.8mm 1/2.5″ F2.0 180-degree HFOV with M12 threading, that cost under $9.

My initial idea was to use it to find any cameras that use near IR illumination. It was decent in this regard, but this sacrificed image quality when balancing the light levels in post-production.

Mounting the camera and driving around at night captured some detail. However, homes and vehicles that had incandescent lighting showed up, while it blocked the LED lighting. It was not ideal to locate near IR illumination specifically without additional hardware. This was a dead end. 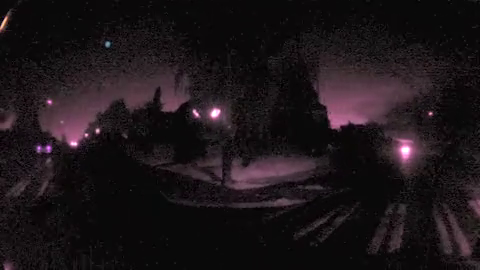 However, the daytime footage was noticeably better, and it revealed how vegetation and non-vegetation objects really contrast from one another in near IR light.

The next idea was to create a 360-degree view from the RunCam2. The 180-degree wide angle lens would lower the number of required shots needed to stitch the final image. Since I was not going to use the mobile phone, Google Streetview was no longer an option for creating the final image map. I used ICE (a now defunct Image Composite Editor that Microsoft was researching) and Hugin. I used Hugin to create the following image. I then used GIMP to fill in the blind spots.

The visible light filters were nothing more than foam board fitted around the RunCam2 and floppy disk material covering the lens. This allowed me the option to create a variety of filters that would have a snug slip fit on the RunCam2. They are durable, simple to make, and material costs were low.