With a couple of flights done successfully, it was time to go back to the location where the earlier plane Bryce was lost. The area seemed to have something that may have influenced the loss, in addition to other factors. The park is rather small, so anyone walking on the field was a no go. With the occasional walker, the park was clear. The ESP32-Cam system was activated to get a GPS lock, while the routine of preflight was done. During the gyro setup, the controller made an unusual beep which normally occurred when arming. This turned out to be an oversight in the manual that was shipped with the plane and something that would plague future flights.

With the field clear, the plane was thrown and promptly crashed on the ground. The elevator throws were reversed, but this wasn’t noticed at the time. There was no reason to think the throws could be reversed since the manual mentioned nothing of it. After removing and re-installing the battery followed by another preflight, the same results happened. Initially the payload was suspected as the cause, but more walkers were arriving on the field so flights were stopped at that location.

Since there was still time that morning for flights, another park was visited that has more space. The preflight revealed the throw reversals. After binding the TX and RX, if the elevator or rudder are held in full position for a few seconds the controller beeps. It appeared that the elevator throws were back in the correct position, but the rudder was not. In addition to that, the gyros didn’t appear to be operating which was noticeable in the wild flight that occurred after launch. The plane pitched hard and did a loop ending the flight with a crash. Another attempt was done without the payload, but the plane was a hazard to fly, ultimately ending in another crash. 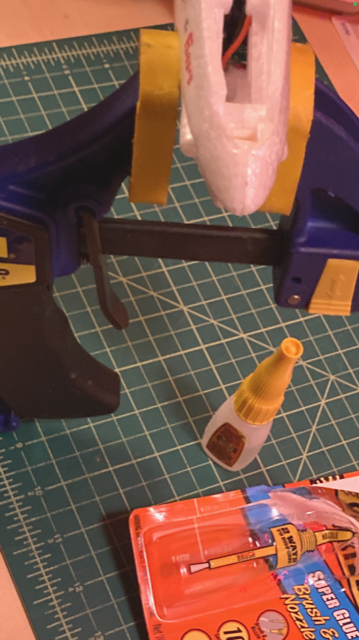 The front of the plane was now split and all future flights were canceled until the true cause was found and addressed. The next couple of days were going to be prime flight weather. The data collection was the primary goal. How this was done didn’t matter and it was not strictly confined to the use of a plane. So instead of flying the electronics payload on the plane, the electronics were tethered to helium balloons. It wasn’t clear how many would be needed, https://www.omnicalculator.com/everyday-life/helium-balloons. This site seemed to suggest one 24 inch balloon would be enough. But a total of three 24 inch balloons were used that were purchased for $20 from a local party supply store. There was just enough room in the car for them to fit. It turned out to be a wise choice since they would be in use for a couple of days. 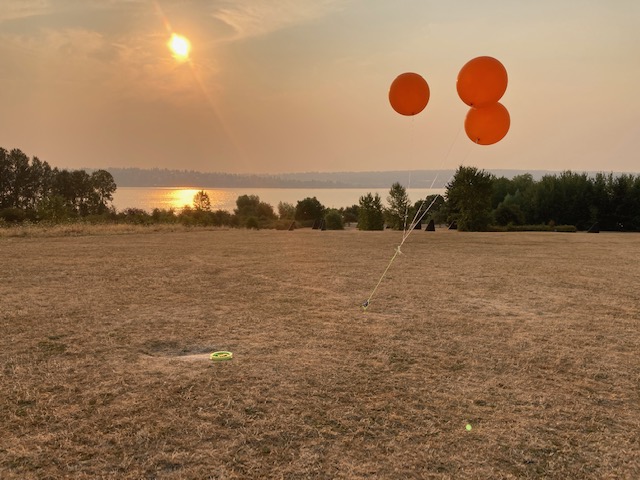 The following day they were launched from a reel that was used for kite flying. The reel would allow the balloons to get height, loiter, then be reeled back in once enough time for a survey had passed. The first location was back to the smaller park that was the location where Bryce had lost radio lock. While the balloons gained elevation, there were a few onlookers that were curious about it. The balloons were able to get to height and they were held there for a few minutes so the electronics could gather data. All seemed to go well, so they were reeled back in and packed up for the next park. 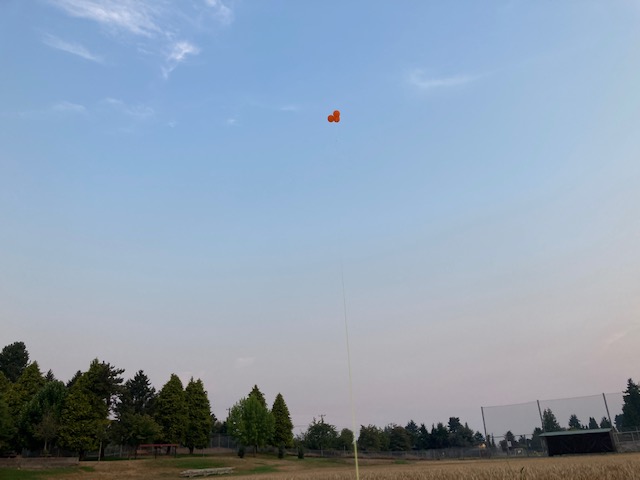 Again, more onlookers took interest in the flight. This park afforded more space, so more slack was let on the line letting the balloons gain more altitude than the previous park. The park allowed for a total of three flights and the electronics all appeared to be operating as expected. 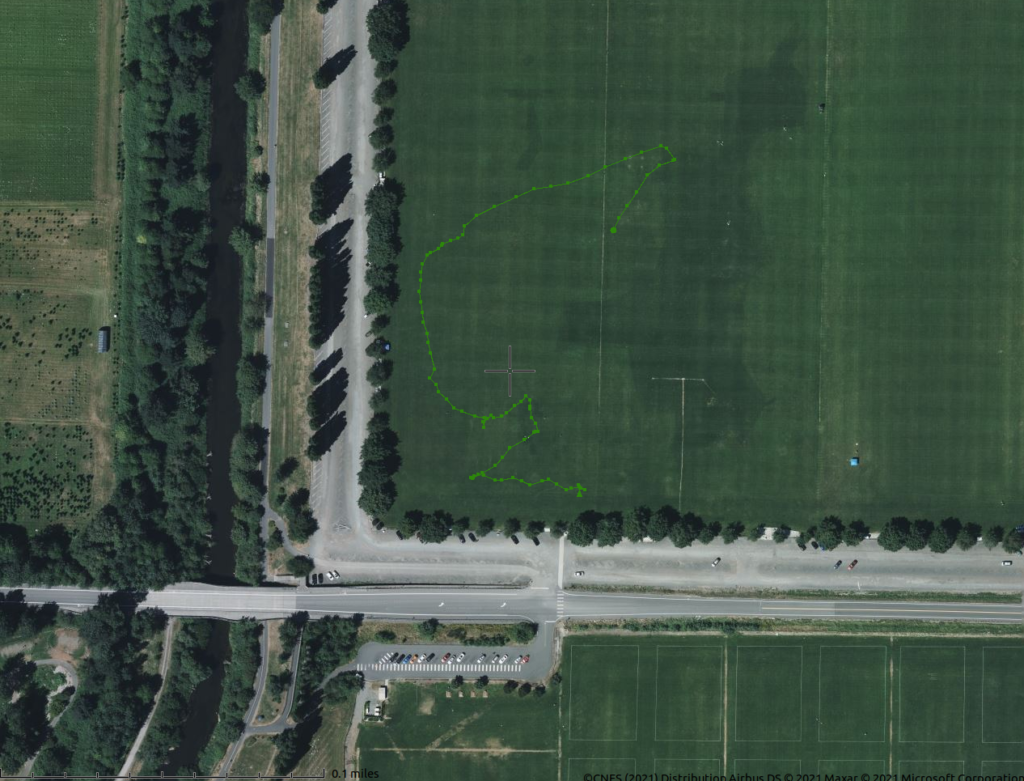 With all of the flights done, the data had revealed something unexpected from the park were Bryce was lost. The number of wireless networks was much higher than any other location. This number had an impact on the sampling rate, dropping it down to 12 seconds instead of the average 6 seconds. It followed the same pattern of more networks detected as more altitude was gained. The Bryce flight was at the operational limit of that plane. When it did loose radio lock, there was a good chance the interference caused the plane to not recover. Because of this finding, another use of the system could be for preflight surveys to identify potential interference. 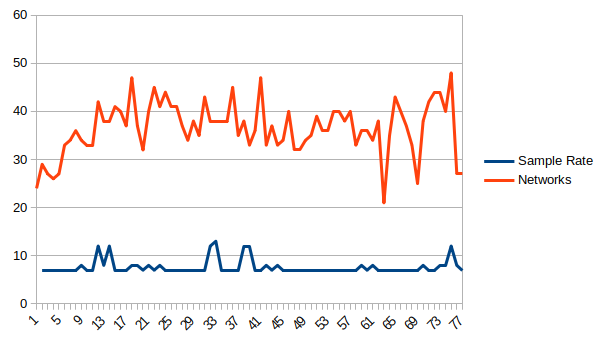 Focus was returned to the plane. It turns out that throw reversal is available for elevators by holding the gimble down, or rudder by holding it to the right, see http://chuakenghua.blogspot.com/2018/09/volantex-ranger-600-reversing-servo.html. Both could be reversed at the same time holding the right gimble to the lower right. That motion is also one of the steps for calibrating the gyros, which also includes holding the left gimble to the lower left. It’s possible that the gyro calibration during preflight inadvertently reversed the throws. So the process for preflight was to calibrate the gyros first by holding the left gimble to the lower left, then holding the right gimble to the lower right until the controller beeped. Next the throws would be checked by verifying that when the elevator gimble is pulled down, the elevator moves up. The same for the rudder, if the gimble is moved to the right, the rudder should move to the right of the plane. This would then be followed by testing the gyro reaction by pitching the plane back an forth then rolling the aircraft. If all of these tests passed, the plane could then be armed when ready for flight. The arming enables the throttle to spin the motor, moving the propeller. Once armed, the throw reversals are disabled. This was a concern from the crashes, if a throw reversal could occur midflight, which fortunately is not the case. Some additional modifications were done to the TX. The beeper was replaced with a yellow LED along with a twist on antenna.

The next section will cover how the modified radio transmitter worked when field tested.