There was an earlier post regarding gimbal stabilization, https://www.cloudacm.com/?p=3609. The focus then was using software instead of hardware as a solution. During that research, I found information about self leveling platforms used on kite lines. Here is a video demonstrating the results, but I wasn’t sure how it was accomplished.

I then found a video from Evan Reinheimer demonstrating his use of a picavet. The picavet is a platform that gravitational self levels when suspended from a kite line.

This next video may not pertain to the topic of self leveling. The rigging method is worth mention because kites fly best once at height and are prone to dropping when close to the ground. Evan mentions this. You will see this in my demonstration later.

Interestingly, the history of the picavet, goes back exactly 100 years. Here is a copy of the article written in Nov of 1912 by Pierre L. Picavet, the suspension method’s namesake, http://robroy.dyndns.info/KAP-history/picavet.html. Here is some more details about the picavet suspension method, especially the lacing pattern.

The picavet rig I built was made from rigid foam board. I used standard eye-loops for the suspension line. The suspension line ends were looped through a kite ring that was then attached to a carabiner. When lifting the kite, each carabiner was wrapped with the kite line to fix it in location. This made it simple to attach and detach when extending and retracting the kite from the air. I had to use care to prevent tangling of the suspension line, but it was relatively easy to manage. Here are some demonstrations of the setup.

On one of the videos, the platform did experience some twisting. This turned out to be a benefit since some still shots could be used to create the following panoramic image.

I also used the platform to capture FLIR data with a MLX90640 sensor. The captured data was then process to create the following video.

To give some perspective, this video shows footage from a camera directly attached to the kite line. It is clearly difficult to watch.

Here are some photos of the picavet rig I used. It was simple to make with materials that are readily available. 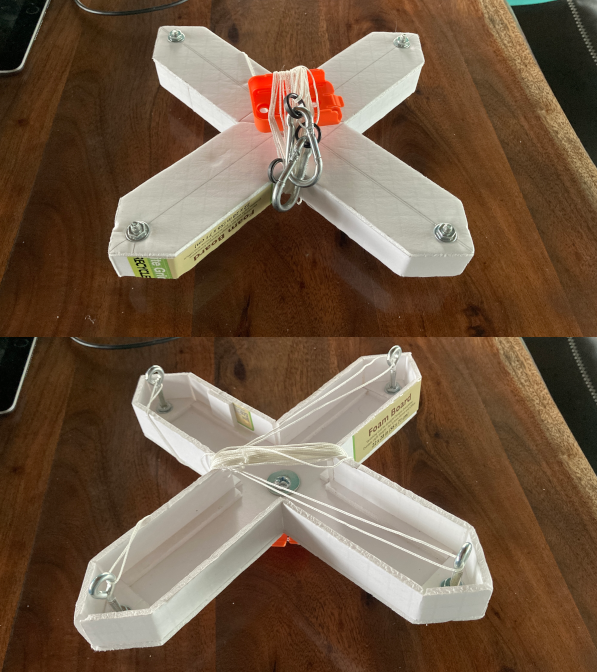